Please download the free Parenthub app from the app store. Once downloaded search for @stannsrespect and follow the instructions to join the school.

A great match that was keenly contested. St Ann's had Ismael missing due to sickness but the other children battled on bravely.

Badsley took the lead but St Ann's hit back straight away with a goal from the captain. Badsley re-took the lead and St Ann's tried everything to equalise, however, it wasn't to be. The team were rightly despondent but Mr Daughtry and Mr Skjold told the team to use this game as tool to help them in future matches.

St. Ann's put last week's match well and truly to bed after a muddy, hard fought victory in Rawmarsh. After a goal less first half St Ann's raced into a 3 nil lead only to be pegged back to 2-3. Charlie made some fine saves in the goal as the defenders put their bodies on the line to keep the score down. Ismael was back in the team and had a fantastic game setting up some of the goals. Eventually St. Ann's got the 4th to give St. Joseph's no way back. The team were delighted on the journey back to school where we reflected on last week's performance and understood that it helped to pave the way for this victory.

A great game of football between local rivals. St Ann's dominated the first half but Eastwood cam back strongly in the second half. St Ann's took a 1 nil lead and also missed a penalty but were pegged back and went on to be losing 2 v 1. Charlie saved a penalty for St Ann's and Riley scored the equaliser.

The school team went to play a tournament at Sheffield United's training ground. A Fantastic day!

The children in Y6 went to play and watch at the New York Stadium. We all had a great morning cheering the school team on.

Mr Skjold took a b team to play Badsley school

Well done to the 'new' school football team who entered a competition at Sitwell School on Saturday 23rd March. The team didn't lose a match which is a great achievement to say that they have not played together before.

Children receiving their medals and certificates for the Rotherham Schools 7-a-side October 7th 2017 - 'We've only gone and won it!'

The team came first on goal difference and got a shield as the winners.

The school had special medals made for the children as we are so proud of them.

The team came second on goal difference and got a silver medal. 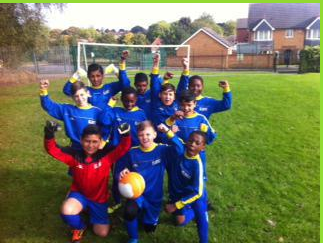 SAJIFC played a 7-a-side tournament on the 8th October. This was the first time that the team had played together but this didn't stop them getting to the semi-final. The team were unlucky and lost in the semi-final 1 nil. Mr Skjold and Mr Daughtry are very proud of this achievement especially as the team is made up of children from Y4, Y5 and Y6.